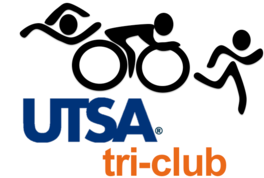 ​The UTSA Tri team had a very successful 2015 Fundraiser, with a few of our own athletes racing too! Our Coach Mark Saroni and Women's Captain Leah Taylor took the Overall Male and Female podiums, respectively; with Andrew Joy placing 4th in the Men's Collegiate Division! A huge thank you to everyone who came out to race and support our team.

These Tri-Hards kicked off the season with a well-rounded finish at the 2015 Tri Aggieland Triathlon! It was truly a veteran's race, and UTSA's Leah Taylor pulled off an amazing finish to take the Collegiate Championship in the women's field. A big thanks to A&M triathlon for hosting! What a great start to the season=)

The UTSA Triathlon team headed to Possum Kingdom Lake for the biggest SMW-regional team race of the season! The squad camped at the PK-Lake state park and it was a wonderful bonding experience to welcome the newer athletes. UTSA had the largest collegiate team in attendacnce, and several athletes completed their first triathlon! Athletes Leah Taylor, Alli Koch, and Zach McVey took the podium in their respective races, and we also won the Relay division.

​The 'Runners competed in the Sugarland Tri Andy's Triathlon in October as our final Fall triathlon; and what a successful race it was! A huge thank you to Annie Shawe and Frida Montoya for hosting; and a big congratulations to our 8 athletes who completed their first tri, and our 4 podium finishes at the race! This flat and fast course was a great introductory experience for our freshman teammates and will defninitely be on the schedule in the years to come!

​The Roadrunners took 10 athletes to Denton's Mean Green triathlon in March, bringing home some hardware along the way with Leah Taylor's #1 female bike split securing a 3rd place overall finish in the women's division, qualifying her for the Draft Legal Sprint at USAT Nationals in April! After notable finishes by all athletes, UTSA finished 5th in the race out of 13 teams! 8 athletes also secured their qualification for the 2015 USAT National Championships!

​The UTSA squad competed for the first time in University history to compete as a team at the USAT Collegiate National Championships! A huge thanks to all of our supporters; from UTSA Campus Recreation to all of those who supported our annual fundraiser, the Texas Tough Duathlon, we wouldn't have made it this far without your help. Go 'Runners!